We liked the catchy title of the show hosted by Zach Galifianakis so much that we decided to do something a little similar. Here is an interview given between two gentlemen who work together through their Macs. No verbal conversation, just emails. That leaves a lot of gray area for interpretation. Take it as you want!

1.    You’ve been out of college for almost a year now….How is life treating you?

One word…adulting. I’m not sure if that is a real word or not, but for now we will act like it is. There were a lot of things that I expected to just happen and did not think about the process of how those things get done. For example, I learned to never put a deposit down on an apartment that has not opened yet. There are a lot of things that didn’t go my way but I’ve taken some pretty good lessons from them.

2.    You decided to take this job at Key Signature back in August…..Was it everything you thought it would be?

I was not expecting to be running around so much when I first got here, but that’s what I get for joining Key Signature in the middle of event season. I’ve gotten a lot more from this job than I ever planned. I was expecting a typical 9:00 – 5:00 and that is not what this is at all. I honestly think I lucked out by how much I’ve gotten and learned from working at Key Signature and under you.
3.    What have you learned about me that surprised you?
Well you recently showed of how freakishly good you are at Connect 4. I get frustrated because you NEVER lose at anything.
4.

What part of this job has made you step outside of your comfort zone?

Networking. Networking and having to just walk up to people and start talking to someone who I do not know was really hard for me. That’s why I always followed you around like a little puppy at the beginning or I waited to be approached by others. Now, I probably talk too much to people.
5.    Do you have to sing everything???
Maybe if you didn’t get songs stuck in my head ALL OF THE TIME, I wouldn’t sing as much. But don’t be fooled, I hear you quietly singing in your office after you hear me!

1. What made you get into the entertainment business rather than perform?

People who knew me back in my SC days will remember me singing and performing all of the time.  I started singing in the 6th grade mentored by some really talented 8th graders.  These guys were really naturally talented.  Pitch perfect and runs for days.  I wanted to be like them.  So me and the younger guys practiced every day.  We came to school early and left late.  We started a RnB boy group called Forte.  We thought we were going to be the next Boyz II Men.  We showcased every chance we could get.  Striped polos and Kango hats were our thing.  I started wanting to learn the business of music in high school, decided to study music business in college and fell in love with the behind the scenes work that it takes to produce a show or concert. I had some really good professional mentors as well and now its weird to be the mentor.  I think having been a performer helps me be better at spotting great talent.  It gives me more confidence on who to suggest to our clients.  2.  What was your end goal when you started Key Signature? Has it changed or grown?        I guess to build something that our employees, clients, and artists trust and respect.  Then retire and let one of you guys run it!  I think at this point, we’ve definitely done that.  Now if I can just get to the retirement part, relax and visit you from time to time.  I do think the original concept did change.  The clients needs dictated our services and we grew faster than I expected.  I’ve got some ideas for the future.  Everyone will just have to wait and see.

3.Have you learned anything new since bringing me on in August? Some skills can’t be taught and some people are blessed with natural gifts.  I can’t quite figure out why everyone likes you so much…..(joking).  I’ve learned that history repeats itself in different forms.  I’ve definitely learned the virtue of patience. 4. Why do you think we work well together? Gold and Blue my friend.  No other way to explain it.  Take the TRUE COLORS personality assessment and you’ll know what I mean. 5. Be honest, what is it that I am better than you at doing? I got nothing!  I’ll give you social media.  Definitely not driving.  You might be a better singer than me, but it’ll take a lot of drinks for anyone to find out.

At the end of the day, we are just two guys who love to try and outdo the other, but also love working together. As you can see, there is never a dull moment, no angst, and not a day where we dread working together…most of the time. 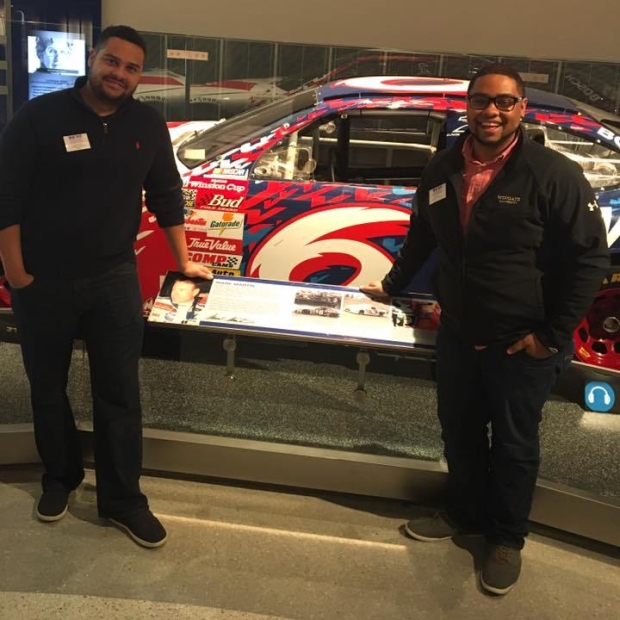